I was born in the Netherlands at the end of August. When it was time to leave the hospital, my two year old (at the time) sister, Dana, declared "This one stays here", talking of me. Welcome to Earth, Michael.

My family lived in the Netherlands for about six months before moving to Germany. We lived there another six months, then moved to Denmark. We stayed in Nærum, Denmark for around a year. My Mormor (Danish for Grandmother) tells me that I would always love going out on walks. I would ride in the stroller, and I would give this big, sweet smile to all the elderly ladies.

Moving the the United States, we lived in Garretson with my father's older brother, Matt. We found a house just outside of Garretson and moved in during February of 1997. It was a beautiful house, set up on a rise, railroad tracks running closely by. I have quite a few memories from Garretson, both at our house and at preschool. One being that I rolled out of my bed every night to watch the train roll by. I love trains, and always have, so having the tracks running right by our house was incredible for me, but my parents may care to disagree!

September of 1999, we moved to an acreage between Hurley and Parker, SD. That house was amazing, despite having no air conditioning, cracks in the walls that allowed wasps to wake me up, and the scariest basement ever. However, our upstairs hallway had tunnels in it. Yes, tunnels, every kid's dream. My class in Hurley was a whopping 6 kids! I know, it's overwhelming. Over the years, it gradually grew to 9, but we still had PE with the class above us. I had the biggest crush on my kindergarten teacher there. Construction had to be performed on our classroom while we were there, so my class was moved to an area that was the equivalent of a storage closet, size-wise. During the time that we were stuck in there, my twin brothers, David and Daniel, were born.

Finally, we arrived here in Elkton, SD on April 15, 2003, and here we have remained since. I've made many friends here, and am currently preparing to graduate. I will graduate among the elite in my class of 24. I look back on my life as a whole, and I realize that I have many, many memories, both good and bad, and I will always cherish them. My classmates are unforgettable as well. They have managed to convince me in some cases to do things that I normally wouldn't do, and I am glad that I went with it. I've had a multitude of experiences that I regard as invaluable, and will provide me with stories later on in life.

At school year's end last year, my sister Dana graduated high school and enrolled in college. After many years of having not much more than a cease fire with each other, we matured and became close within the two years prior to her graduation. Consequently, her graduating was difficult, but it was eased by not seeing her much while she was working. Now it's my turn, and my poor mother cannot hardly accept it, but she's so loving and thoughtful that I say that I love you Mom! You've always been there for me, for whatever the problem was, and I would not be where I am without you. And my father helped me immeasurably as well. Thank you too Dad! You've been understanding, loving and very, very patient whenever I didn't understand something, no matter how clear it was. 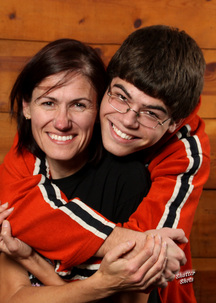